There are now many styles of helmets to choose from, old and new, but only the new generation of helmets is equipped with the MIPS (Multi-directional Impact Protection System) Low Friction Layer. MIPS is a revolutionary technology that lets the helmet slide relative to the head, adding more protection against rotational violence to the brain caused by angled impacts. To identify the new generation of helmets, look for the little yellow MIPS logo.

MIPS is based on reality

Most helmets are tested only by dropping them vertically onto a flat surface. MIPS technology is the hard-earned result of over 19 years of studies and testing by some of the world’s leading researchers and brain surgeons, based on reality. Because in reality when you fall, your head more often hits the ground at an angle, creating a rotational violence that leads to strain in the brain. With the MIPS Low Friction Layer inside, the helmet can absorb more of that rotational violence, adding better protection than helmets not equipped with MIPS.

The secret behind MIPS’ patented technology derives from the human brain. The brain is surrounded by a low-friction cushion of cerebrospinal fluid that protects it by allowing it to slide slightly on impact. MIPS imitates the brain’s way of protecting itself by giving the helmet its own low-friction layer between the outer shell and the liner. This layer also slides to absorb a portion of the energy created by an angled impact and can reduce the rotational violence otherwise transmitted to your brain. The combination of the brain’s own protection and MIPS therefore provides more protection than a helmet without MIPS technology. Very simple and very effective.

MIPS reduces strain in the brain

The MIPS patented technology was developed by some of the world’s leading researchers in biomechanics and neuroscience at the Royal Institute of Technology (KTH) and the Karolinska Institute in Sweden. Strain level images derived from lab tests where two identical helmets, one with MIPS and one without, were tested at the same speed show a clear difference. The more red the more strain in the brain. A helmet with MIPS reduces the rotational violence transmitted to the brain. To make sure that a helmet is equipped with the added protection provided by the MIPS Low Friction Layer, make sure to look for the small yellow MIPS logo.

What happens on impact?

When the head is subjected to an angled impact, the brain slides along a membrane on the inner surface of the skull, which reduces the rotational violence transmitted to the brain. This feature was copied and technically resolved to create the MIPS Patented Brain Protection System. It is a low friction layer between the head and helmet which, in experimental and numerical tests, has shown a reduction of the violence to the brain. 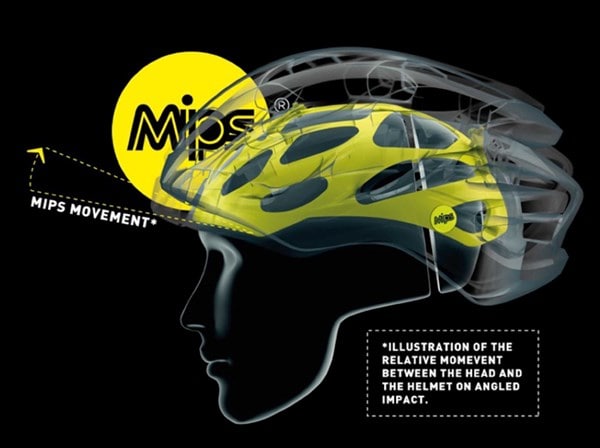 Protection in all helmet categories. 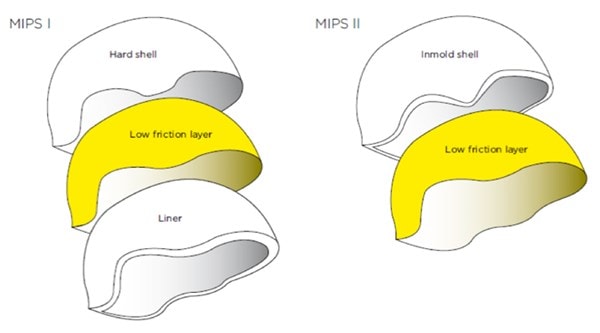 State of the art knowledge

MIPS possesses state-of-the-art knowledge regarding the causes of head and neck injuries, resulting from the combined experience of 30 years of scientific research in the field. Besides the MIPS Brain Protection System the owners of MIPS have, together with the Royal Institute of Technology, developed an advanced computerized finite element model of the head and neck that can be used for injury prediction in impact simulations. This model is used to test and optimize the protective properties of safety helmets with MIPS.